We are athletes. Visionaries. Dynamos.
Whether they’re taking to the skies or to the seas, you’ll find our Flock everywhere!
You can always recognize a Flock Athlete by their tenacious spirit and their devotion to the thrill of living boldly.
WATCH THE FLOCKS LATEST VIDEO
Do you have what it takes to wear The Bird? Email us! 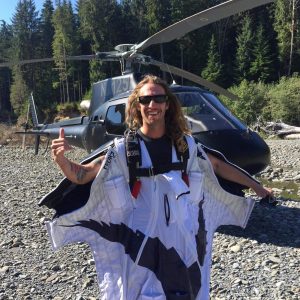 This king of the sky knows exactly what it means to chase your most inspiring dreams.

Matt grew up in a small town in Victoria, Australia. He spent his early years working as a scuba instructor and boat lackey. After years of exploring the sea, Matt’s insatiable curiosity inspired him to literally reach for the sky. He completed his first jump in 2010 at Skydive Chicago. Skydiving instantly became a way of life.

Eager to spend more time in flight, Matt funded his own education to become an IBA Tunnel instructor. Soon after, he moved to Dubai to begin his career as a full-time skydiving coach. At InFlight Dubai, Matt perfected his craft. He devoted countless hours to sharpening his skills, planning jumps, and becoming an exceptional skydiving instructor. In 2013, Matt started an all-star, 4-member tunnel team called InFlight Dubai Skynamic. Skynamic reigned over the wind tunnel competition circuit, placing in Russia’s White Knights, FAI Indoor Skydiving Championship, and the Dubai Clash of Champs. Matt has participated in record-setting Free Fly Jumps and he once held the World Record for the longest tunnel flight!

Like any virtuoso, Matt Munting knows that big dreams come with their share of big lessons. Although he has encountered many obstacles and injuries, Matt stays focused on his goals. He keeps his dreams and his attitude elevated- just the way he likes his adventures! Even when he is challenged, Matt radiates humor, passion, gratitude, and a whole lot of devotion. That’s the stuff of legends!

Through his passion for flight, Matt is currently innovating the way athletes use wingsuits. Matt takes what he learns from skydiving and applies his skills, knowledge, and intuition to the sport of base jumping. Matt’s style is bold and unwavering. Some say he’s breaking new ground in the sport, but for Matt, that’s just another exhilarating product of what happens when you believe in yourself and invest in the things that inspire you.

These days, you’ll catch Matt right in his element: soaring through the clouds as a tandem skydiving instructor. Matt’s story inspires us to challenge the impossible and to keep looking up! If you keep your eyes on the skies, maybe you’ll be lucky enough to see the world from Matt Munting’s perspective. 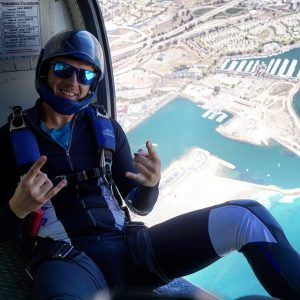 Life is my inspiration! After crashing my speedwing in September of 2017, shattering my heels and breaking my back, I am so grateful to be alive. Every morning I wake up and start working towards the best version of myself. Through content creation, education, and leading by example, I want to show people that there is more than one way to create your life -and it doesn’t have to be the way society intends us to. I want to inspire others and to spark the question, “am I living my best life?” because, after all, we only have one!

Please verify your age to enter.